No. 1 In The World. DeEtte Sauer's Magnificent Journey. 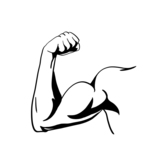 Be unstoppable. This inelegantly named newsletter is the internet’s best storytelling about the willp